Spherical Billboard of a Line Strip with Geometry Shader

Hi everyone! This is my first time posting here. I made a similar thread at gamedev.net, but unfortunately I got no response, so I will try my luck here instead! My problem is very similar to this topic from 10 years ago (since I’m new here I can’t post full links, so I will just give the topic info): Billboard geometry shader posted by Vexator with topic id 6561

I’m writing my first geometry shader in glsl. I want to extrude points uploaded to the gpu to two triangles facing the camera (spherical billboards). The idea is to calculate the three axes of the billboard (typical lookat() function) and then position the vertices along these axes. What i’ve got somehow works but the billboards start rotating in the wrong direction when the camera moves close and/or spin around their z axis. Any ideas what i’m missing? What bothers me is that the camera’s rotat…

However, the solution posted there redirects me to the khronos forums home page.

I will briefly describe the problem also posted at gamedev. Since I can’t post links, you can google search the thread by typing : Spherical Billboard of a Line Strip with Geometry Shader in OpenGL

I’m interested in rendering hair in real time using OpenGL, so I studied Nvidia’s presentation from SIGGRAPH 2010. In it, they suggest rendering each line segment as camera facing quad instead of the GL_LINE_STRIP primitive.

My camera is built following the tutorial found at the learnopengl page.

The camera class is:

For the “eye vector”, I use the Front vector of the camera class. The line coordinates are passed in a VBO. Here is the Veretx Shader:

Each line has two points and each point has its own struct called vsout. In it, I store the normalized distance from the camera to the point (eye vector), and the thickness value. Each vertex is multiplied by the model_view matrix (view * model). The Geometry Shader is as follows:

Even though it looks good from a distance, there are some issues when I zoom in. There seem to be some discontinuities in each line segment, as if each segments rotates differently. All quads should face the camera, and the bottom of one quad should align with the top of the next (if that makes sense ).

You can see the pictures at the gamedev forum because it will still not let me upload an image.

I’ve tried many different things but nothing seems to work out for me. This is the closest I’ve been to a correct bilboard geometry shader, but the disconnecting lines and the weird rotation when the camera zooms in kinda ruins the whole implementation. Thank you for reading!

However, the solution posted there redirects me to the khronos forums home page.

Ok, here’s that forum thread you wanted to link to:

I’m writing my first geometry shader in glsl. I want to extrude points uploaded to the gpu to two triangles facing the camera (spherical billboards). The idea is to calculate the three axes of the billboard (typical lookat() function) and then position the vertices along these axes. What i’ve got somehow works but the billboards start rotating in the wrong direction when the camera moves close and/or spin around their z axis. Any ideas what i’m missing? What bothers me is that the camera’s rotat…

Finding a working link to the solution posted there took a few minutes, but I found it. Here you go:

Current link on the Khronos Forums:

Ah yes the Internet Archive didn’t even cross my mind! Thank you taking time to find the old thread. I will try the technique and will post an update soon.

So I checked the solution provided, but it doesn’t work, because this is a different problem. In classical billboarding, the geometry shader takes one vertex and expands it in 4 directions in x and y axis.

In this problem, the geometry shader takes 2 vertices as input (a line) and expands the top and bottom vertex, so that they are connected in a triangle strip. The tangent must follow the camera movement.

Here is the pseudocode from the Nvidia presentation:

Oh ok I understand. Another question for the eye vector distance would be : do I use the camera’s position in the 3D world (as it is passed in the vertex shader), or the camera’s front vector that points towards the scene? The front vector seems to almost work, but there are still disconnected lines and weird rotations of the quad segment when I rotate the camera in close distance.

As a note, the vertex/geometry shaders haven’t changed from the original post.

for the eye vector distance

Why do you want that? If you’re rendering billboarded cylinders (or conical frusta, i.e. tapering cylinders), the object/world/clip-space dimensions are determined by the radius of the cylinder and are independent of the distance to the viewpoint.

If you’re trying to render thick lines, you’d need to scale by eye-space -Z (and you’d want the quads to be perpendicular to the eye-space Z axis, not tilted to face the viewpoint).

Hmmm could you please explain the last sentence because I’m afraid I didn’t quite understand that. The eye vector will be the -z axis of which parameter?

If you’re drawing thick lines (rather than cylinders), you’d use the eye-space -Z axis is the eye vector, not the vector between a point on the line and the viewpoint.

Oh ok, so its going to be

I’m sorry if I still don’t grasp something, but I’m still a bit beginner/almost intermediate

vec3(0,0,-1) will suffice. The resulting sideVec is normalised so magnitudes don’t matter.

It seems the problem is still there for some reason. Is it because the vertices are in model-view space? And the projection is done in the geometry shader when the final vertex is emmited? I also did the the projection-view-model transform only in the vertex shader but the results were worse. I’m definitely missing something here because this problem has tormented me for months 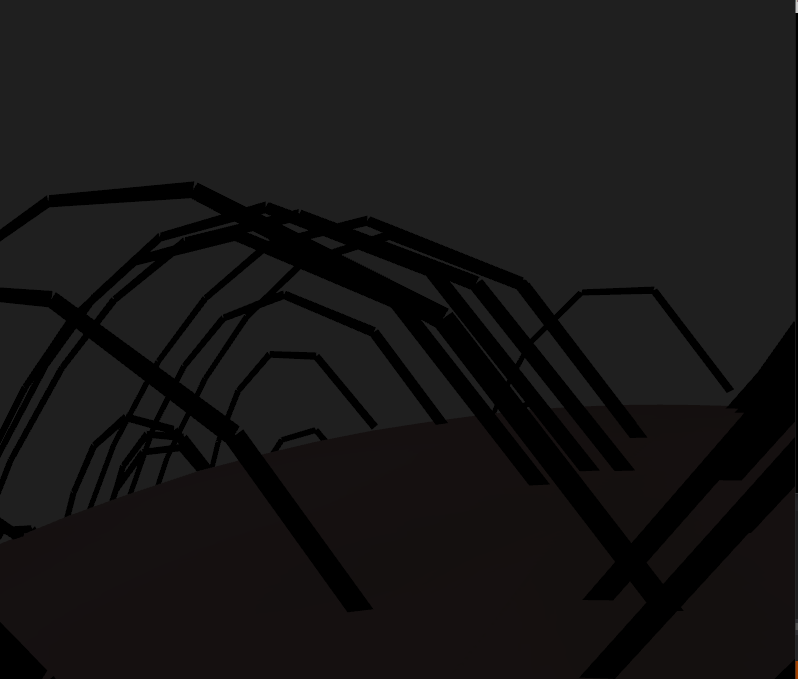 The calculations can be done in object space, world space or eye space. But all vectors involved need to be in the same space. So if the vertex positions are in eye space the eye position is (0,0,0) and the eye vector is just the position of one of the vertices.

If you’re drawing line strips, you will get gaps at the joins if the vertex shader processes individual segments; to avoid that, the input primitive type needs to be lines_adjacency, and the side vector at each vertex needs to be the average of the side vectors for the line segments which share that vertex. And you’ll need to add an extra vertex at the beginning and end of the strip so the first and last segments have an adjacent vertex.

Ok, so I did a bit of research about the line strip adjacency and I modified the code so that it draws GL_LINE_STRIP_ADJACENCY instead of the simple GL_LINE_STRIP.
Basically I duplicated the top and bottom vertex to create the adjacency.

The geometry shader now takes 4 vertices, 2 adjacent and 2 that describe the line (as seen in the next sketch): 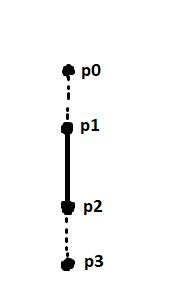 The modified geometry shader is as follows:

Unfortunatey there are still gaps at the joins in the line.

Oh wow! It worked! I will definitely read the solution again to try and understand it in depth. Thank you so much! I can finally move on to the next task now!

After a bit of research, the reason why there are gaps at the line’s joints is because OpenGL does not support line miter. Luckily enough for my hair project, a cubic bezier tessellation is going to mitigate the problem, since more vertices are introduced, giving a more “rounded” line. So even the one cross product in the geometry shader should be enough, since the problem will be hidden with tessellation.

GClements’s solution works well and is quite elegant for line segments where there is no line tessellation involved.