There is a good technique, that can dramatically improve result of classical ‘Shadow mapping’.

But I have little problem with second pass:
I can’t determine algorithm of building silhouette map.

I have found three variants of it, and each of them is different from other two:

That does it mean: ‘Extrude degenerate quads to completely cover silhouette
edges in shadow map space.’ ?

It seems as a to expensive one: using of all pairs of vertices and related faces.
So, it is rejected. Am I right? 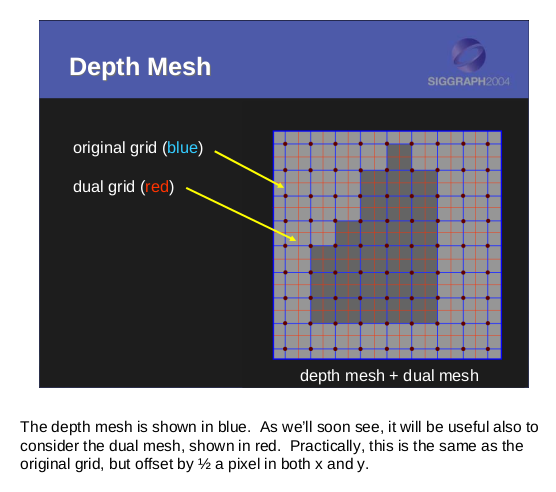 Thus, approximation will be performed for all texels on the border of the shadow.
This is important thing! (will return to this point later)

So, It seems the topic is ready to I ask the basic question:
It is definitely I want to use border approximation (silmap with [(width - 1) x (height - 1)] resolution).
But I have no detailed description how to do it.
If I build silmap determining the discontinuity as a point with angle between ‘light direction’ and a ‘tangent to the surface’ that small enough, it gives me acceptable result?

I did investigation for ways of implementation silhouette rendering.
As a result I have two possible techniques:

BTW I didn’t understand 1st variant with the sentence ‘Extrude degenerate quads to completely cover silhouette
edges in shadow map space.’ Could somebody explain that?

I think the fact of me use it for direct light (orthographic projection) lets me determine the discontinuous as a enough difference of depth between neighbour texels.

Thanks for any reply!
Have a good day!