I’ll use this model for a crash test dummy as I work my way through the second half of the tutorials.

Thanks to everybody in this forum who’ve helped me get this far.

I’ve been running into a problem with the “Stencil Test” tutorial, which the link points to.

Depth testings seems to go nuts when I try to do anything with a stencil.

Here are the models I’m rendering in a splash screen:

The program’s name “Net Results” should be drawn in the background, with the tennis court rotating in front of it. The giant golf ball is a temporary part of the tennis court model, to help me see if the lighting effects are working.

This looks right when running the splash screen code.

I’ve added that purple box and placed it on the playing surface for the stencil tutorial.

The tutorial’s exercise is to use the stencil test to draw a yellow outline around the purple box.

I’m using assimp, so there’s also a reference to that header somewhere.

I’ve tried this several times, and watched it fail. Before the stencil code is added I test everything but. The purple box is being drawn, the yellow box that will become the outline is being drawn around it. Everything looks good.

Here are the stencil related code fragments I found from the sample program, and how I fit them into my code:

In the setup function:

glDepthFunc(GL_LESS) seems redundant, but it was in the sample.

“Net”, “Results” and the tennis court are drawn.

Before the purple box is drawn:

After the box is drawn, preparing to draw the outline:

The depth test is disabled to draw the border so it will be visible even if it’s behind something.

Set some uniforms in the outline’s shader and draw it.

And the depth testing seems to be toast.

“Net” and “Results” are drawn first, if no depth testing was in effect I believe these would be drawn behind everything else. Next the court is drawn, then the purple box and finally, with GL_DEPTH_TEST disabled, the yellow outline. Yet the outline is the element that’s written over by almost everything.

The first suspect was the enabling and disabling of GL_DEPTH_TEST. I removed all the stencil stuff and kept the depth test stuff, images displayed fine.

Commenting out the stencil statements, then uncommenting them one by one shows the depth testing goes bad with the glStencilOp(GL_KEEP, GL_KEEP, GL_REPLACE) statement.

I know this function uses the results of a depth test fail. Do I need a different argument for it?

What’s your value for glClearStencil? Also, in OpenGL (and contrary to what you might expect) clears are affected by the current buffer writemasks; what this means is that if glStencilMask is 0 then the stencil buffer will not be cleared. Either of thse could be messing up your expected result.

you could solve this easily without stencil test:

didnt test that, but that should work (… hopefully! ;))

What’s your value for glClearStencil?

I’m now setting it to 0xFF with the idea that 0 is the “No write” stencil value for a fragment. I have no clue if that’s a bad idea.

Also, in OpenGL (and contrary to what you might expect) clears are affected by the current buffer writemasks; what this means is that if glStencilMask is 0 then the stencil buffer will not be cleared.

I’m far from understanding these subtleties.

But the fog is beginning to lift, as you’ll see in my response to John Conner, which might not be finished before I crash after working on this all night.

I appreciate this advice.

I’m writing this after working on this program all night. If this post becomes incoherent, that might be a contributing factor.

I now suspect what I thought was a depth test issue was a case of items being rendered setting stuff in the stencil buffer.

Thanks for showing me a different approach to stencils than that taken in the tutorials.

Joey DeVries has done an amazing job with this set of OpenGL tutorials, but perhaps this particular topic could use a little work. I think the subject of stencils is just confusing to newbies by it’s nature.

I couldn’t get your stuff to work quite right either, but it did provide the foundation I used to get close to what I’m looking for. 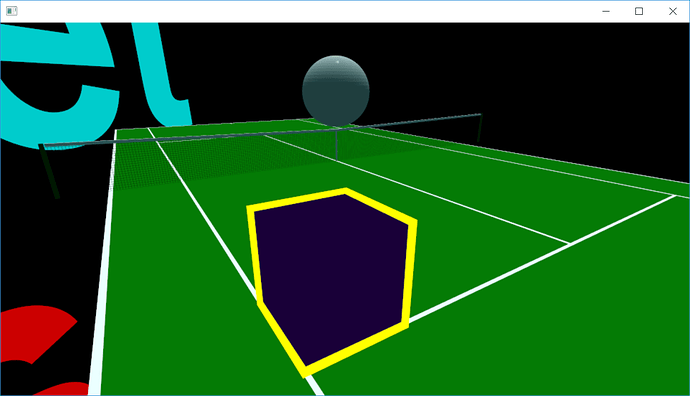 Is there a way to upload these images to this server? I’ve had to link to images on my web site.

I could certainly call it a victory and move on, but I’d like to understand stencils better before looking at more interesting tutorials.

So my assignment is to present that box with that outline from any angle. It’s not working quite right: 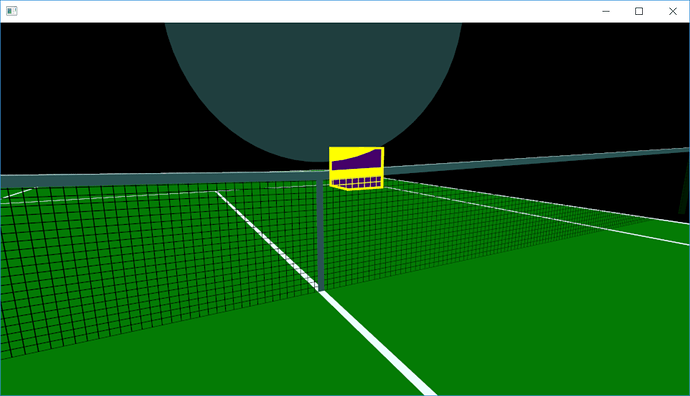 Things drawn in front of the box should have the outline burned through them, but the box it surrounds should be displayed with the same depth testing as any object in the scene.

So the image shouldn’t have a section of the ball, or the net, drawn in yellow, except where they are in front of the border.

Here’s what I’m doing. Please let me know where I’m messing up.

I diverge from your example in that I draw everything up to the box without invoking anything about stencils.

So that’s where I’m at now, thanks again for helping me get this far.

I was hoping this:

would prevent the yellow that’s splashed over anything rendered in front of the box and border.

Also, I’m not understanding where I use glStencilMask(). As I understand it statements like:

dictate the value written to the stencil buffer. What part does the glStencilMask() function pay in that.

I could go on, but I really need to crash. I’ll look at this post after I wake up to see if it makes any sense.

Thanks again John, and mhagain, for your assistance.

there is a stencil buffer with certain values in it. if you’ve cleared it. it will contain the value GL_STENCIL_CLEAR_VALUE. (use glGetIntegerv() to get it, use glClearStencil() to set it)

the stencil test must be enabled to have any effect:
glEnable(GL_STENCIL_TEST);

once you draw something, you generate a lot of fragments, each has a certain “fragmentvalue”. (use glStencilFunc() to set it as well as mask)

2nd part: what to do if the stencil test fails / passes ?
thats what you can define with glStencilOp(sfail, dpfail, dppass)

I decided to walk through the stencil code in your link with Visual Studio 2017’s debugger.

I’m still recovering from the all night grind, so I’ll probably figure it out. Any hint’s would be appreciated.

yepp, got that same error with VS 2017, i’ve coded that with codeblocks + minGW, there it works just fine. just add 1 to each array, doesnt matter at the end of the day how big these arrays, as long as they can hold at least MAX_… elenemts. OpenGL will silently ignore glGen*(MAX_…, …) and glDelete(MAX_…, …) if MAX_… = 0.

the convenient thing about this coding style is that you dont have to create new variables for new GL objects, just add a enum above and prepare it in the “void Initialize()” function (by the way: picked that style up in “openGL programming guide 8th edition”)

I think I now know the basics, what you describe in response #6 and what you demonstrate in the code sample you linked, but I still have a question.

And I still don’t now how to solve the stencil problem I’m currently having with my little project.

I think I understand glStencilMask() now.

glStencilFunc()'s mask argument is for testing. glStencilMask() masks what is written with glStencilOp(). Calling glStencilMask() isn’t necessary in your example because the mask defaults to 0xFF.

Which leads to this question:

Why doesn’t glStencilOp() just have a fourth argument for the mask, which would make glStencilMask() unnecessary?

I’m going to work on my little stencil project for a bit. I have some ideas to try.

Basically, I want to figure out how to have fine control of the stencil test as I draw multiple objects, some masked some not, in the scene.

As always, thank you for your efforts.