I want to draw line using OpenGL instanced rendering.
Each line segment is an instance.
But OpenGL draws each segment as separated mesh, drawed using [glDrawArrays].
Because of this all segments are layered on top of each other.

How i can combine calls of GL functions ( glBlendFunc[Separate], glBlendEquation[Separate] ) to draw line segments on one alpha layer ( as one big mesh ) ? 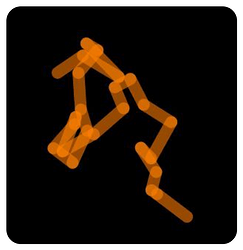 So you want to avoid the double-rasterization and double-blending to some pixels rendered to by overlapping fragments?

There’s probably a lot of ways to accomplish this. But a few that come to mind:

There are several ways to handle this, each with their drawbacks:

There are several ways to handle this, each with their drawbacks:

If you’re rasterizing convex polygons (as with the above image), you don’t need 2 passes. Just enable both stencil test and stencil write in the same pass, and never scribble on the same pixel or sample twice.

If OTOH you’re rasterizing concave polys (e.g. via triangle fans), that’s where you get into 2 passes:

In my application each line segment is a quad ( 4 vertices, drawed as GL_TRIANGLE_STRIP ).
In each fragment shader of segment quad I calculate the shortest distance between gl_FragCoord.xy and the line, determined by two points, transmitted from vertex shader.
By this distance i calculate antialiased border clip alpha value and multiply by the alpha of all segmented line.

Therefore, unfortunately, i think, the depth test can’t help me with this problem.

You can discard the fragment if the alpha is zero. That just leaves the anti-aliased borders. If that’s an issue, you’ll have to render each layer separately and composite them.

Can the next GL calls help me with this problem ?

In each fragment shader…

Therefore, unfortunately, i think, the depth test can’t help me with this problem.

If your filled fragments were all either opaque or transparent, then depth test (or stencil test) could be easily used to solve your problem.

However, since your alpha values are translucent, I see your point. For a single pixel, essentially what you want is to:

If you know you’ll be rendering on a constant background like this using the same line color (just different alpha values), you could probably get what you want by using a GL_MAX blend equation. See:

For an image of what this would look like, see: 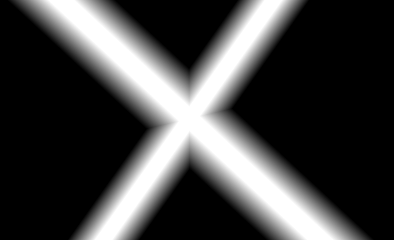 If those assumptions don’t work for you, you’ll need to use another approach, such as one of: