I’m writing compute shaders on google version 2.79. When Google update to 81 version, my shaders show error (with empty description) on linking program with shaders. In Google update log I did not find the information.

After testing i saw that error is shown when i try write in buffer with index 11 and more.

Has anyone encountered this error? Why does she appear? How to avoid it?

You haven’t really given the reader much to go on here.

Presumably you’re getting an error trying to link an OpenGL ES compute shader. However… Google version 2.79 (and 81) … of what exactly? On what OS/GPU/driver/driver version? What exactly is the error message that you do get with empty description? Buffer index 11 for what – UBOs or SSBOs? What is the shader source code you’re providing when you get this link error?

What values do GL_MAX_COMPUTE_UNIFORM_BLOCKS and GL_MAX_COMPUTE_SHADER_STORAGE_BLOCKS have on your patform? Are you exceeding these limits with your buffer binding? FWIW, the OpenGL ES 3.2 spec (if you were using a GLES 3.2 profile) only requires 12 and 4 for these, respectively. If you’re getting this error for UBO bindings, index 11 is suspiciously close to the former,

Thank you for the answer!

I can not send the full code. If necessary, I can write a similar program and send it
When I created buffers, i take type “SHADER_STORAGE_BUFFER”. When i bind it to arg of shader program i switch it to texture:

and write ( if not write, error is not occur): 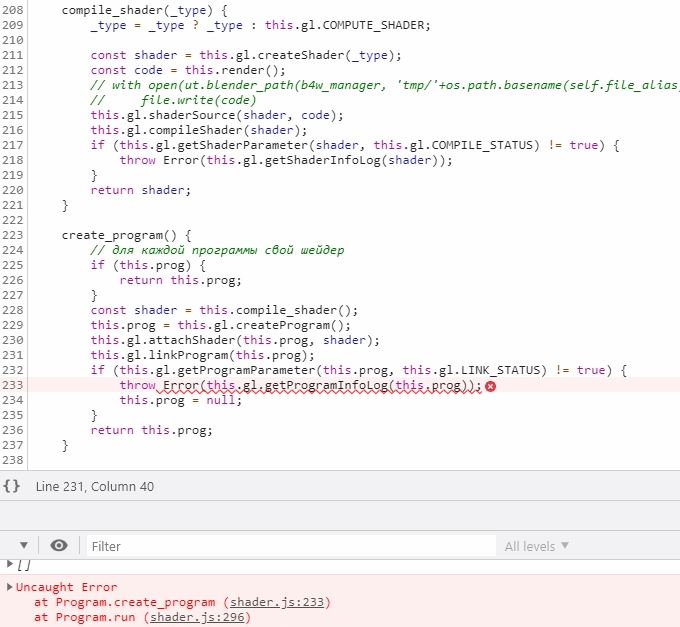 Can you express any thoughts on this? do you need more information?

Can you express any thoughts on this? do you need more information?

There’s so much confusion in your previous posts it’s hard to even know where to start.

First, Google is a company, not a software platform or library. So “Google version” makes no sense.

Websearching these version numbers reveals that you are talking about Chrome, a Google web browser.

So presumably you’re trying to run a compute shader in WebGL inside of Google Chrome.

Given all the confusion below, I’d suggest you put aside your current project, go grab an existing WebGL compute shader demo that says it runs in Google Chrome, and go study it carefully. Do some reading until you understand it. Then modify it to do what you want.

Why are you running such old graphics drivers rather than the latest version?

When I created buffers, i take type “SHADER_STORAGE_BUFFER”. When i bind it to arg of shader program i switch it to texture:

That’s not how it works. Buffer objects themselves have no type. They’re just (conceptually) a block of data in graphics memory. It’s what you do with a buffer object (e.g. what buffer bind target(s) you bind it to) that determine what it is being used for at that specific time in your OpenGL command sequence. Read about them here: Buffer Objects.

So we’re missing code here, but it appears you’re trying to create a TBO and then setup to access it as an image in the shader.

However, in the portion of your shader code you’ve quoted:

it does things with an SSBO, not a Image sampler. So I have no idea what you’re doing. If you’re trying to access tex as an image, why aren’t you doing it through the image unit you bound it to using an image sampler? And if you actually did want to access the underlying buffer object as an SSBO instead, why did you show setup code where you bind it to an image unit and pass that image unit to a shader uniform (presumably) backed by an image sampler?

Sorry for delay, now I wrote a code that gets the same error. It is one html file that try link program. In google chrome version 79 it works successfully, in later versions get error:

Are you got the same error? it looks like a buffer limitation

Try with less layout to check if it is a buffer limitation. Or change binding number from 12 to 11 to see if you got the same problem.