I’m writing CFG lowering passes to try to remove all physical pointers from SPIRV. One thing I’m seeing is out-of-bounds AccessChain ops as a result of the mem2reg pass: 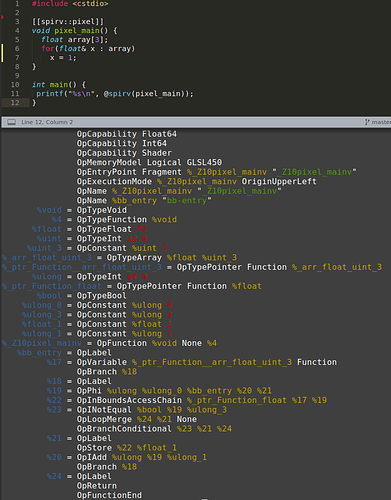 What’s going on is the mem2reg pass is killing the storage for x, and replacing all uses of x with its initializer *begin, which is a PHI node of an OpAccessChain (the original decay from array to a pointer) and OpPtrAccessChain (++begin). Then the pointer-removal pass goes and splits apart pointer-yielding PHI ops into their base- and index- scalarized halves to replace OpPtrAccessChain as OpAccessChain. That gets rid of the pointers in the control flow, and it also transforms the *begin value of x to the %22 = OpInBoundsAccessChain.

While this is now valid Logical addressing code, it does contain an out-of-bounds InBoundsAccessChain before the conditional branch. I’m probably going to add a pass to do some dominator tree work that drags AccessChain instructions closer to their users to avoid this. I should add I’m not using LLVM–all these passes are homegrown with the intent of allowing Logical SPIRV run C++ code.

Question 1: Is one-past-the-end OpInBoundsAccessChain into a non-struct composite type valid? It is valid in LLVM, but the SPIRV docs are silent on that.

Question 2: Are there any code gen algorithms or literature or anything to help remove pointers from an IR? I can’t find anything. What I’m trying to do is totally reasonable, but I don’t see any prior art on lowering C++ to shaders. SPIRV would be the ideal mechanism for accomplishing this, but the only frontends I’ve seen are shader langs that lack these challenging high-level constructs. Writing all these passes in isolation is very hard.