Hi there, i am rendering volumetrics pass into a half resolution texture. Old problem: Adding it to my full res lighting pass will introduce ugly edges. Now i would like to implement a depth aware upsampling and to keep things simple i would like to start with the nearest depth upsampling. Here it is explained pretty well:
mutantstargoat → on-depth-aware-upsampling (use google pls. no links allowed here)

Now i feel extra stupid, cause i dont understand how the downsampling needs to be implemented. What i understood:

What i dont get: Do i render this pass with half resolution (glViewport(…)) ? Cause i dont get any good results. The “upsampled” image still looks jaggy as before

This is my downsample shader code (this pass is rendered in half resolution):

The upsampling is exaclty implemented as described in the link above:

still no luck. i feel the topic is pretty nicely described here and there but all the important details are missing

looking forward to little hint on this. thanks guys

Here is the bad result and second image what i would expect (maybe not that perfect but close to it. For showcase i simply rendered this in full res): 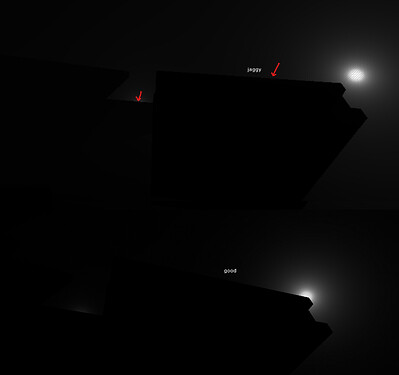