Before starting my topic, see this picture of this application (from Sascha Willems) and task manager.
(github: https://github.com/SaschaWillems/VulkanSponza)

this application renders sponza with particle effect, SSAO, based on deferred rendering.

I guess this phenomenon is related to Synchronization.
Because, All of the examples use one semaphore for rendering and presenting.
In addition, they does not use any fence in acquire-submit-present loop.

However, Even if the application have a sync structure which I described above, I think the task manager should show that the application is using a few of GPU usages. But it isn’t.

I started my vulkan study with https://vulkan-tutorial.com/
and I just draw one triangle with the tutorial. But it uses GPU a lot.

vulkantuto2131×835 61.7 KB
the tutorial application is utilizing the benefit of triple buffer. it has three semaphore for rendering and presenting. And it uses fence for sync between CPU and GPU.

So my questions start here.

I finally found the cause of the GPU 0% Usage.

I got the hint from the description of this youtube video.

After that, I modified the Sascha willems code on creating logical device. After deleting compute queue part in the code, I got the high gpu usage on the sponza application. 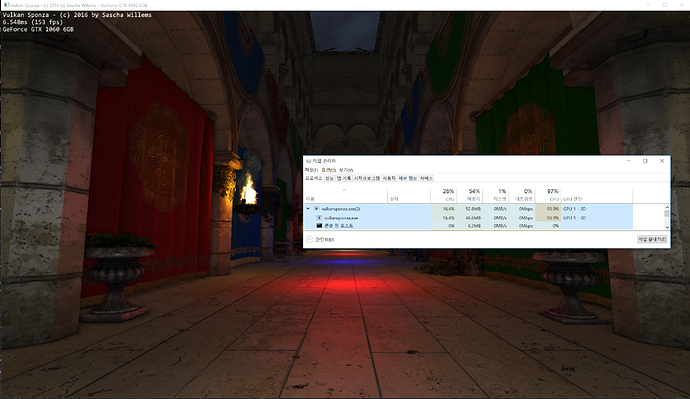 However, the performance is not different with GPU 0% usage. it shows almost the same fps!

The value displayed by the Windows 10 task manager with default settings is pretty useless.

So please use a proper monitoring tool. Even with a basic tool like GPU-Z I get a proper GPU-Load reporting of around 80% while the Windows 10 task manager reports 0 in the default view. For compute load you have to select it manually in the task manager.

oh… I didn’t even have a doubt for the Windows 10 task manager!!

Thank you for letting me know about this.

Plus, I just added one more answer here from Khronos Slack 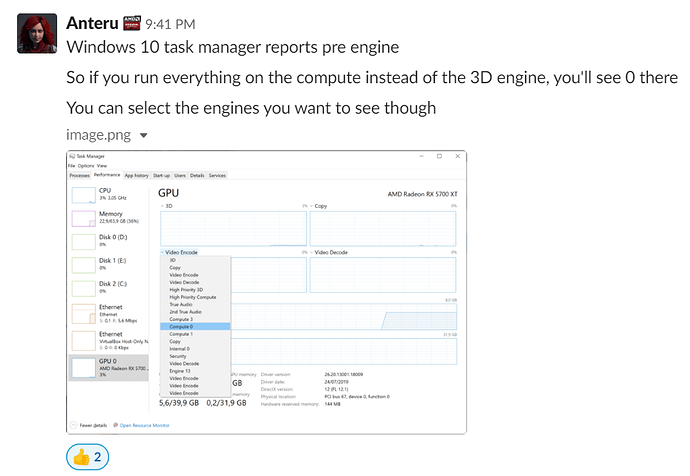 Thanks chlee3211 for the question in youtube and thanks Sascha for the infos.
I have lost many hours on this bad task manager result hehe.