Though I have been using OpenGL for some time now, I have posted in under ‘Basic Coding’ because I feel if this isn’t a driver bug, then I might be missing something very simple.

I have been experimenting with geometry shaders recently to allow me to take some work more work off the CPU.

In my current minial example I have this setup:

I was facing issues and decided to debug it using RenderDoc, only to find this as a result: 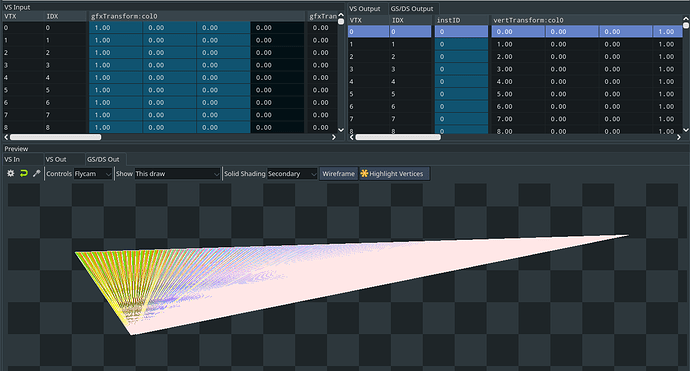 If you notice in the vertex shader output section, for some reason the instID value is overwriting the first column of the vertTransform matrix.

I have been unable to fix this despite a days worth of trying, and by extension I am beginning to suspect that this may in fact be a driver bug. In the case that this is a bug with the driver, I am using OpenGL 4.6 (Core Profile) Mesa 20.2.3.

Thanks in advance for any help and info given!

I don’t know if that might be the source of the problem, but why in the GS, your inputs are arrays whereas they are simple variables in the output of your VS ?

Or atleast, I’m pretty sure that’s the case.

OK. I never used inputs other than built-in in GS.

Have tried it, even putting each field in a separate block. It had no effect.

Thanks for the help though!